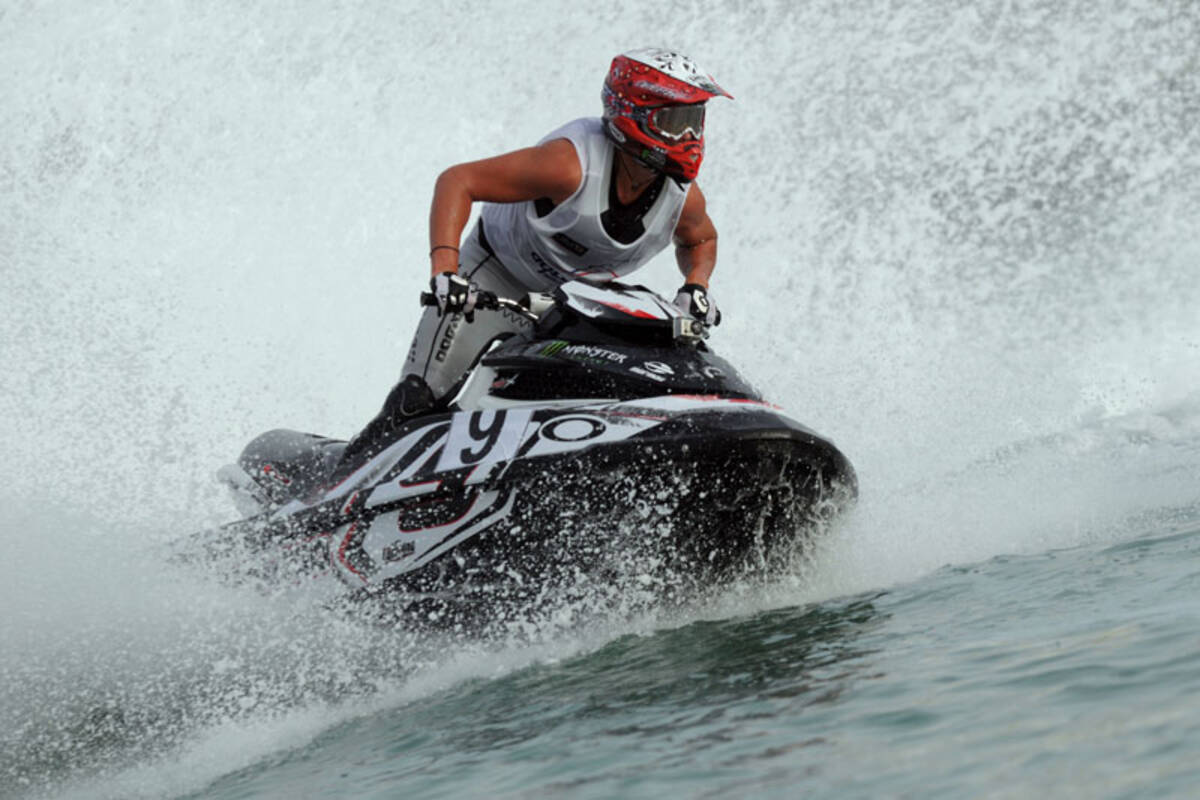 Friday, 2 March, DOHA (Qatar): Cyrille Lemoine added his name to the list of French riders enjoying success in Doha, winning heat 1 of a spectacular and incident-filled race in Runabout, which saw the pole-sitter Francois Medori drop from second to 20th place after he momentarily parted company with his bike, and Franky Zapata climb from the back of the grid to second place before a technical problem cruelly ended his hopes of a race win, three laps from the chequered flag.

In Ski Division and Ski Ladies, pole-sitters Jeremy Poret and Julie Bulteau came through to win their heats but both had to come from behind to do so, with the Slovenian brothers Rok and Nac Florjancic stealing the show in Freestyle, finishing first and second.

It was the 25-strong field in the Runabout division that produced the drama of the afternoon; Kuwaiti Khalid Barbayae produced a blistering start to move from 13th on the start grid to lead Medori, Lorenzo Benaglia and Cyrille Lemoine at the end of the start run.

But a mistake by Medori towards the end of lap 1 saw him flung from his bike and drop 18 places, the French rider recovering to produce an impressive fight back and ride through the pack to eventually finish in fourth place to pick up valuable points.

Barbayae's lead however was short lived, dropping to tenth place on lap two, his race ending with a technical problem a lap later.

Lemoine took full advantage and set about opening up a lead over Benaglia, moving 15 seconds clear of the Italian by the end of lap six.

But the man on the move behind the front two was Franky Zapata; from 24th place at the start he was up to seventh by the end of lap one. Four laps later he was into third place and chasing down Benaglia, passing him and setting about hunting down race leader Lemoine on lap seven.

Over the next five laps Zapata began to eat into Lemoine's 15-second lead and was within a second and looked set to challenge for the lead when he started to slow, a minor technical problem ending a spectacular ride, with Zapata dropping down through the field to eventually be classified in 14th place.

With Zapata going backwards Lemoine was able to cruise home over the remaining two laps to run out a comfortable winner by over 40 seconds, with Benaglia holding off a nine lap challenge by Kuwait's Yousef Al Abdulrazzaq, the pair going on to complete the podium.

Frenchman, Ludo Caumont, who earlier in the afternoon took second place in Ski, produced another impressive ride to finish in fifth ahead of Qataris Khamis Al Hosni and and Waled Al Sharshani.

For defending World Champion Mattia Fracasso it was not the start to his title defence that he had hoped for, starting on a borrowed bike and then involved in a crash that ended his race after just five laps. Two other fancied riders also had a bad afternoon; Jeremy Perez retiring on lap five and Teddy Pons going out two laps later.

In Ski F1, Jeremy Poret found himself in an unaccustomed third place for the opening two laps, before settling into his rhythm, passing Nachete Armillas on lap three and then overhauling race leader Ludo Caumont a lap later, going on to win by 11 seconds.

Ski Ladies produced an exciting opening few laps; Stefania Balzer headed Pija Summer and defending Champion Julie Bulteau on the opening lap. A mistake by Sumer dropped her to fourth behind Marta Sorrentino, with Bulteau picking up two places in two laps to take the lead.

Sorrentino's third spot was short-lived, and after cutting the course and running out the race in fifth place she was later disqualified.

Out front Bulteau was in cruise control and gradually extended her lead over Balzer to run out the winner by over 23 seconds, with Sumer completing a familiar podium line-up. Paolo Boggi claimed fourth place, whilst Russia's Irena Babenko was forced to start the race several laps down due to an engine problem.

The Freestyle show saw a repeat of the result of the last event that the Florjancic brothers competed in, with Rok taking the honours ahead of Nac with Romain Stampers in third.

There was some consolation for Champion Bulteau, her win yesterday giving her third place in the Grand Prix standings.