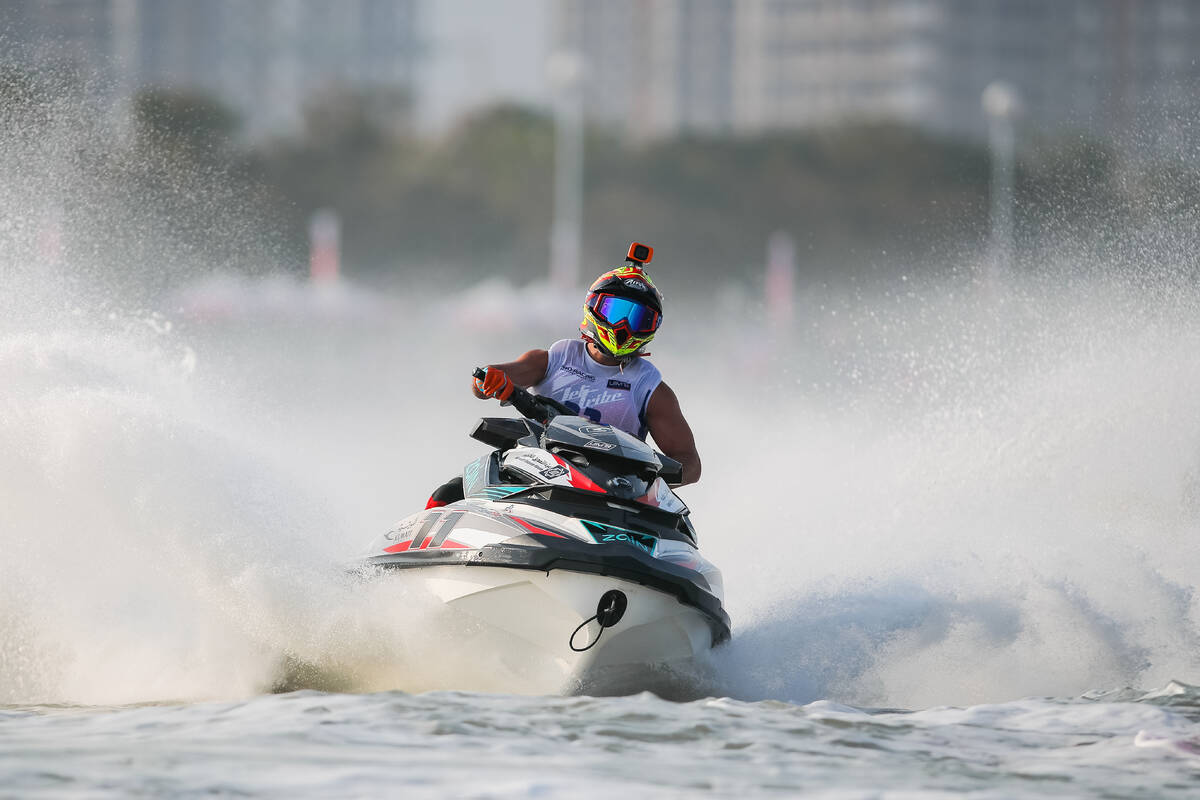 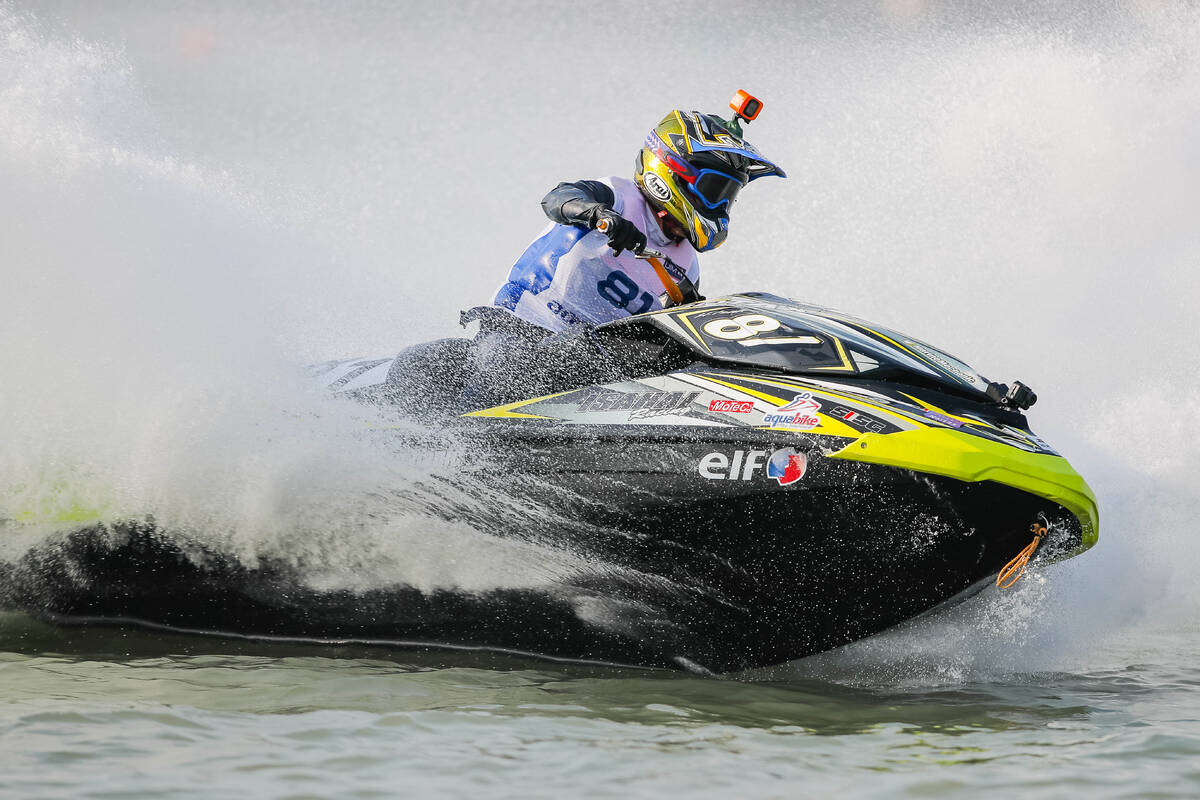 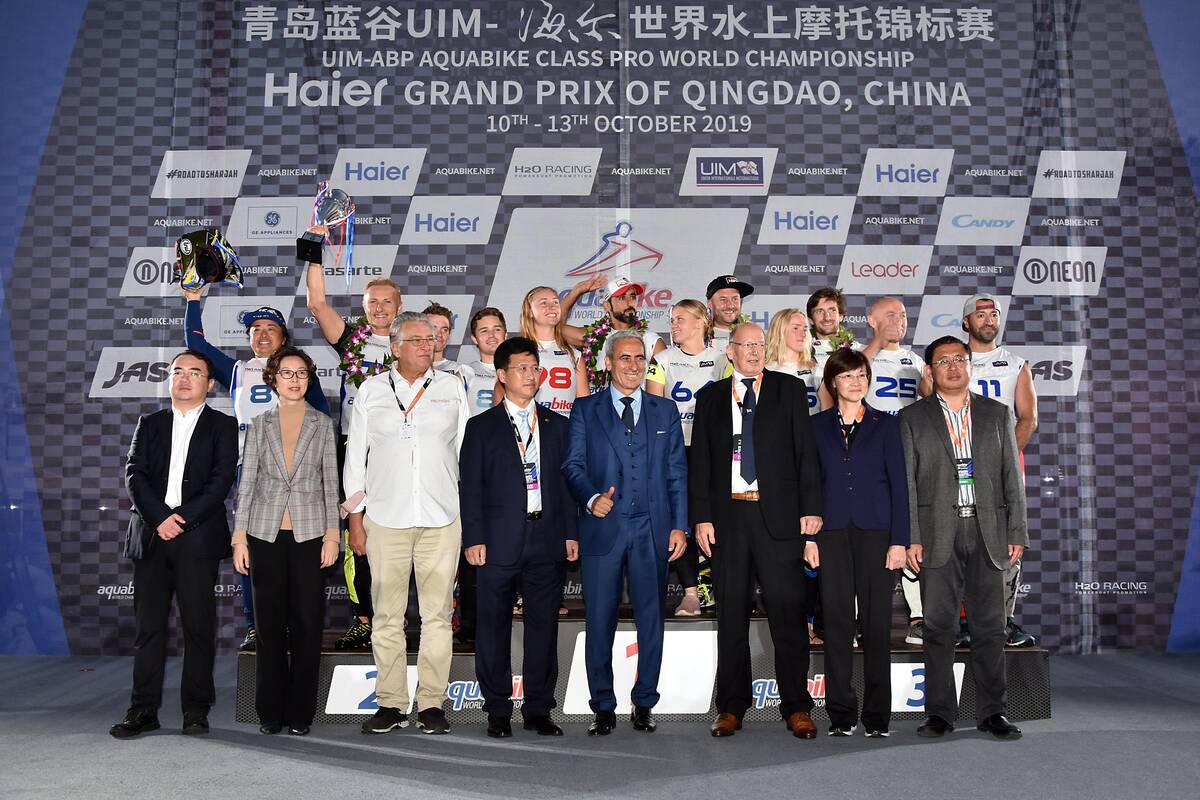 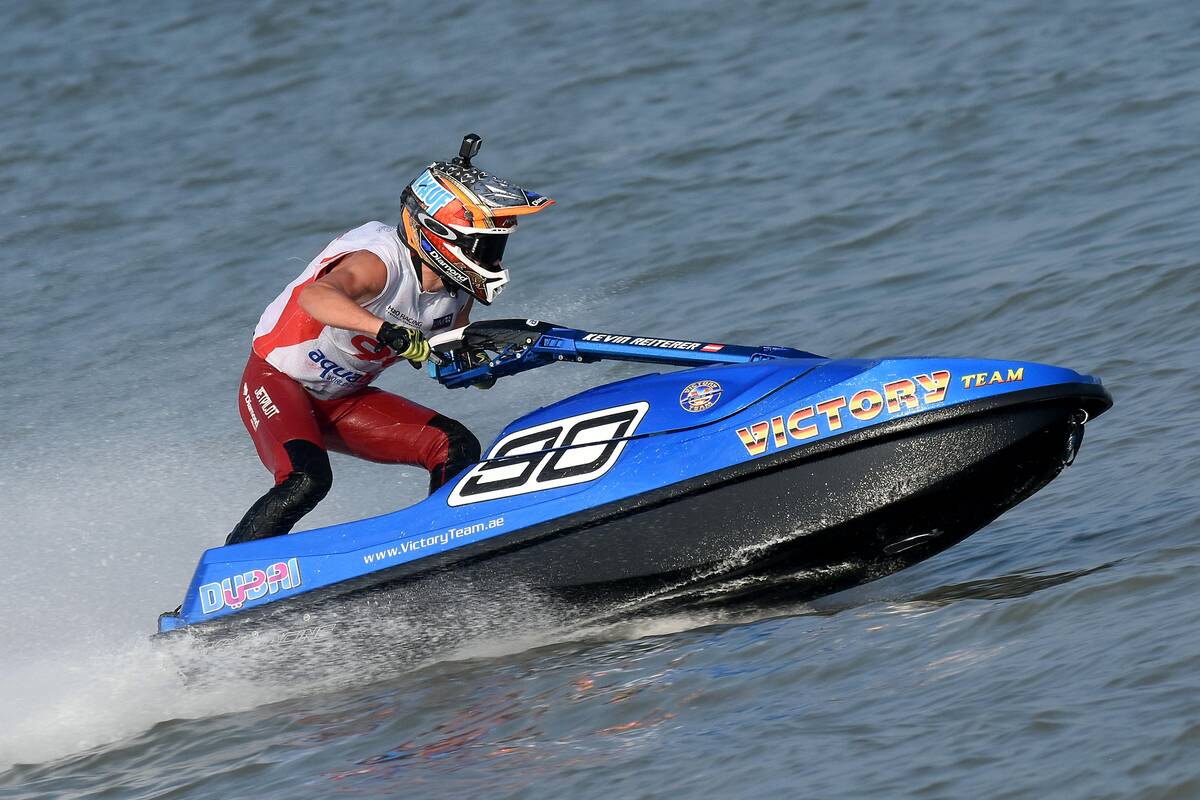 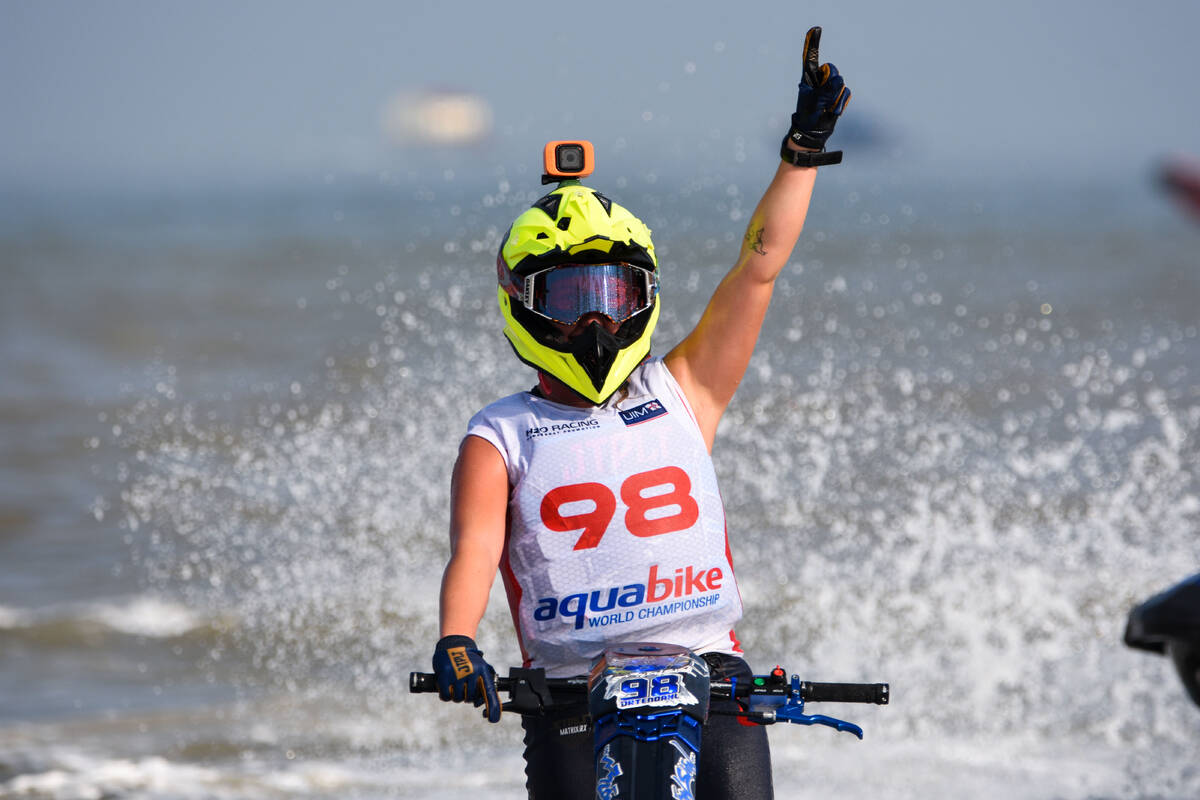 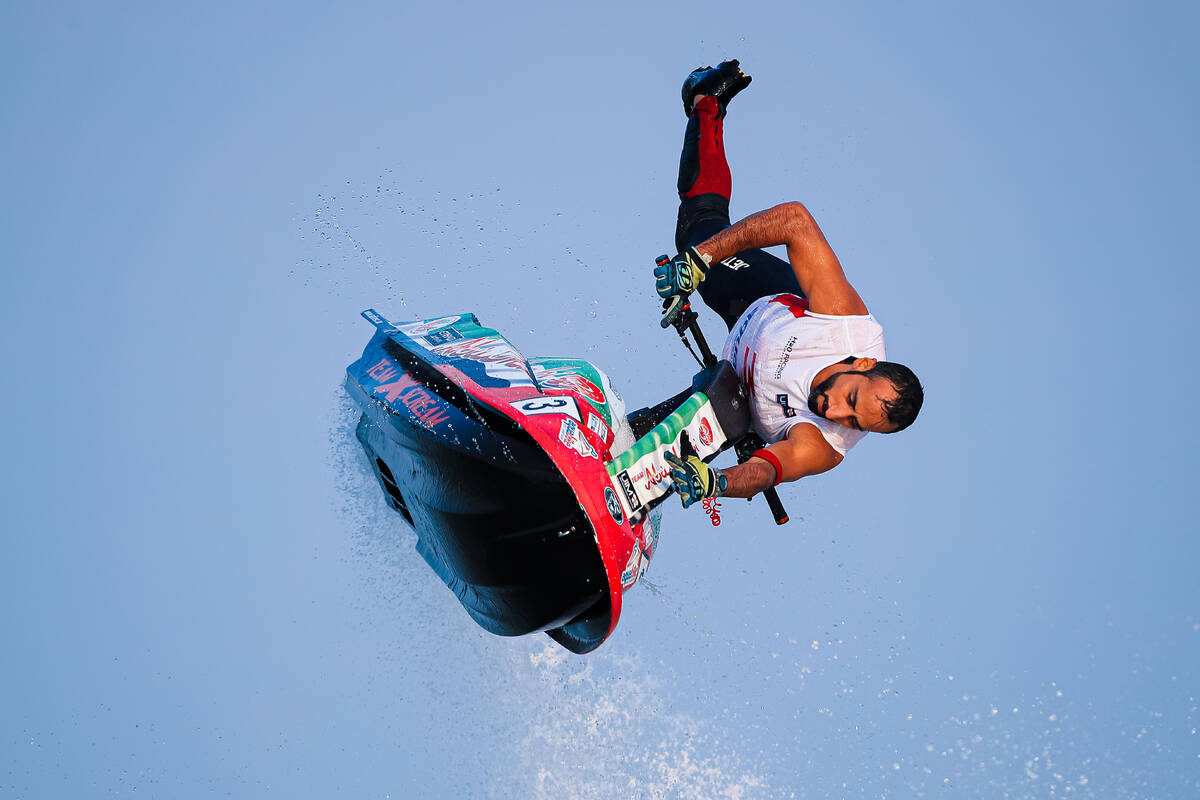 Sunday, 13 October, QINGDAO (China): Moto 1 winner Yousef Al Abdulrazzaq sealed his second Grand Prix win of the season after finishing fourth in Moto 2 at the Haier Grand Prix in Qingdao, with Hajime Isahai making history becoming the first Japanese rider to win in Runabout on the UIM-ABP tour, today’s victory on his championship debut putting him into second overall in the Grand Prix standings.

In a dramatic afternoon Marcus Jorgensen saw his championship lead evaporate when an electrical problem forced him to retire on lap 3 from third place, with Andrzej Wizniewski moving up into first place in the title race after coming home in third behind defending champion Jeremy Perez to seal the final podium slot.

For the second Moto in a row Isahai made a blistering start to lead by the end of lap 1 and this time made no mistake and held point, fending off a sustained race long challenge from Perez over 12 laps to run out the winner by 5.88s. “It is very special for me to win in the UIM-ABP World Championship,” Isahai said. “The conditions were good for me and I was just able to hold off Jeremy but he made me work very hard.”

Perez’s second place was a great response by the Frenchman after breaking down in both the qualifying race and the first Moto and keeps his hopes of retaining his title very much live, moving him up to sixth in the standings, 17 points off top spot.

Abdulrazzaq was unable to make any progress from fourth at the end of lap 1, but today’s result puts the four-time champion right back into contention and into second place tied with Rashed Al Tayer on 97 points, just seven points off top spot.

Lino Araujo picked up his best Moto result on the UIM-ABP tour finishing fifth with Samuel Johansson recovering from a poor start and lying in tenth to finish fifth, just missig out on a podium but moving into fourth in the title race and tied on 93 points with Jorgensen.

In Ski, Kevin Reiterer and Emma-Nellie Ortendahl both delivered another masterclass, each cruising to their third win of the weekend to make it three Grand Prix wins in succession.

Reiterer’s eighth win of the season now means he needs just one point at the final Grand Prix of the year in Sharjah to retain his title, the Victory Team rider dominating the Moto from start-to finish to win by 41.55s. “I am very happy for the team. It was another perfect weekend,” said Reiterer. “I tried to push as hard as I could. My goal is to try to always give my competitors the best ‘Kevin’ to try to beat and although I had a comfortable lead I was pushing my limits.”

In Ski Ladies, Ortendahl once again pressed home her superiority and remains unbeaten in nine Motos this season, closing out the 7 laps to win by 12.68s, and now heads to Sharjah as the clear favourite for the title, leading the championship by 47 points. “It was a good race but I was aware that Krista was there for most of the race and not letting go. But I knew that I could step it up if I needed to,” said Ortendahl. “I have been thinking about winning back the title since Sharjah last year. Now I am close but not there yet but so determined and more focussed than ever.”

Krista Uzare produced her best result of the weekend finishing in second ahead of Sofie Borgstrom and Estelle Poret, but it was Jasmiin Ypraus and Jonna Borgstrom, who finished in second and third in yesterday’s Motos, who completed the podium despite coming home in sixth and fifth.

Rashed Al Mula remains on course to successfully defend his Freestyle title maintaining his perfect record to win his third Grand Prix of the year, extending his unbeaten run to 21 Motos and nine Grand Prix.

The UIM-ABP Aquabike World Championship now heads to Sharjah in the United Arab Emirates for the final Grand Prix of the year on 17-20 December; Kevin Reiterer, Emma-Nellie Ortendahl and Rashed Al Mulla are odds on favourites in Ski and Freestyle, but in Runabout the title race is wide open, just 17 points separating the top six with Andrzej Wisniewski leading the championship standings.

For full classifications and standings: